Posted on May 23, 2018 Posted By: Secretary SecretaryCategories: Devotionals 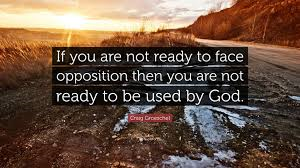 Scripture Reading:1Co 16:8-9
But I will tarry at Ephesus until Pentecost. For a great door and effectual is opened unto me, and there are many adversaries.

Reflections: As part of his planned itinerary, he will be making a stop over at Ephesus. Paul is excited to spend some time there because the area presented a great and important opportunity for the advancement of the kingdom of God. He was quick however, to identify that there were many people against him (adversaries) in the city who were going to oppose his mission. Despite the presence of enemies, he was still poised to make that presence at Ephesus and even stay on for awhile. This meant that Paul was ready to face oppositions and to endure any persecutions just so that he will be able to achieve his destined goals. Sometimes in accessing opportunities to advance your course in life, you will encounter oppositions. However like Paul, this should not deter you. Fight on! Remember, until you are ready to face oppositions in life, you will not get anywhere.

Prayer: Dear Lord, give me the courage to thrive on in the midst of oppositions.

Confession: I will not be deterred by oppositions in life. I forge ahead to accomplish my set goals.