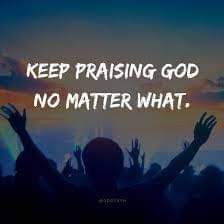 Scripture Reading: Acts 16: 25-26
And at midnight, Paul and Silas prayed and sang praises unto God: the prisoners heard them. And suddenly, there was a great earthquake so that the foundations of the prison were shaken: and immediately all the doors were opened, and every one’s bands were loosed.

Reflections: After giving them a severe beating, Paul and Silas were thrown into jail under tight security. Their feet were also kept in stocks. As they looked at each other, they could tell that even though their bodies had been imprisoned, their mouths were not. They, therefore, began to pray and sing out loudly. The other prisoners could not believe their ears as they heard Paul sing and praise God. They wondered why these new prisoners would not just keep their mouths shut. Soon, the whole prison yard began to shake. A great earthquake had erupted in the yard as a result of the praise songs by the Apostles. It caused the chains to fall off their feet and break open the secured doors. Supernaturally, a way of escape had been created for Paul and Silas just because they chose to open their mouths to praise God in an imprisoned condition. It looked so unbelievable, but it was real. You may be imprisoned in body but remember your praise cannot be gagged. With your mouth, you can ‘praise your way out just as Paul and Silas did. Keep praising God no matter what!

Prayer: Lord, I will praise you with my lips as long as I live.

Confession: No circumstances can stop my mouth from declaring the praise of God.