Posted on May 19, 2020 Posted By: Secretary SecretaryCategories: Devotionals 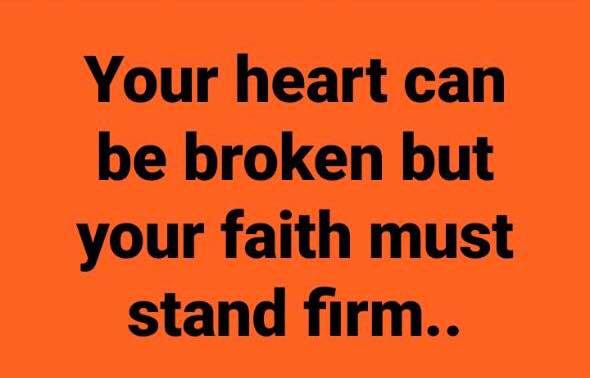 Scripture Reading: Act 9:38 And forasmuch as Lydda was nigh to Joppa, and the disciples had heard that Peter was there, they sent unto him two men, desiring him that he would not delay to come to them.

Reflections: Tabitha, a loving philanthropist in Joppa, got sick and died. Her body was washed, processed for burial and laid in state. Everyone was heartbroken and wept. Among them were some disciples who though heartbroken were still filled with faith and believed God for an unprecedented miracle. They sent for Apostle Peter to come without delay. Responding to their faith, God allowed Peter to get to the scene with the power to raise the dead. Peter walked straight into the room where Tabitha had been laid, prayed and simply commanded her to rise up. She did so instantly. It took the demonstration of faith of the disciples despite their broken heartedness to occasion this encounter with the miraculous. You can be heartbroken in life but don’t ever allow yourself to be ‘faith broken’. You will sure need that faith to bring a change into your circumstances. Remember, faith is the assurance that what we hope for will come about and the certainty that what we cannot see exists (Hebrews 11:1).

Prayer: Oh Lord, may I remain strong in faith even when I get heartbroken.

Confession: I do not loose faith even in heartbreaking circumstances. I encounter miracles.