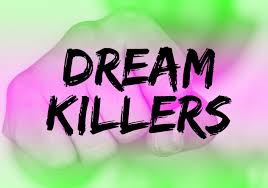 Scripture Reading: Gen 37:20
Come now therefore, and let us slay him, and cast him into some pit, and we will say, Some evil beast hath devoured him: and we shall see what will become of his dreams.

Reflections: Joseph had a dream which he shared with his family. The dream was indicative of his destiny as as a man of influence, authority and power. His brothers, moved with envy, hatched a plan to terminate the manifestation of his dreams. They positioned themselves as dream killers and moved into action. They failed in their initial attempt. Thereafter they sold him to some foreign traders who took him away to a distant land. They thought it was all over with him and his dreams but events years later proved to be otherwise. Joseph survived the evil scheme by divine intervention and rose up to a place of prominence in life. Like Joseph there are dream killers around you. They may have initiated actions to see what will become of you and your dreams but they will not succeed. God will step in. Your dream will live on and see manifestation!

Prayer: Dear Lord I thank you that no dream killer in my life will succeed. Arise oh Lord and frustrate their schemes.

Confession: God is with me. No one can be against me. The dream killers in my life have been disappointed. My dream lives on.