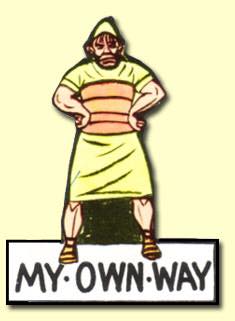 Scripture  Reading:1Sa 13:11-13
And Samuel said, What hast thou done? And Saul said, Because I saw that the people were scattered from me, and that thou camest not within the days appointed, and that the Philistines gathered themselves together at Michmash;

Reflections: The sight of the Philistine army brewed fear in the camp of Israel. He knew he could not go ahead to fight without obtaining favor and direction from God. As he felt Samuel was delaying in appearing, he decided to offer up the sacrifice himself. After all he could help him out, he might have intimated. All God needed was a sacrifice, he might have added to his thoughts. This was a decision in complete error since only Samuel was divinely qualified and approved to do this. This action cost Saul his crown. God rejected him as King in favor of another. It is always safe and prudent to obey God rather than trying to help Him. For instance, in 2 Samuel 2:7, Uzza died for trying to help the ark of God from falling. We also see in Genesis 16 how Sarah asked Abraham to have a child with Hagar since it appeared the promise of God was not going to be fulfilled. Ishmael became the product of that union and the troubles that came with him leaves much to be desired. Don’t ever try to help God!. Rather, seek to know and to do only what His will is.

Prayer: Dear Lord help me to observe all spiritual protocols and to comply.

Confession: I observe and comply to spiritual protocols. I just don’t help God. I seek to know and do only what His will is.