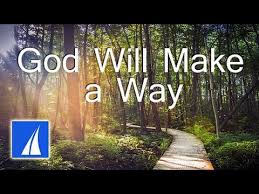 Scripture Reading: Acts 5:22-23
But when the officers came, and found them not in the prison, they returned, and told, Saying, The prison truly found we shut with all safety, and the keepers standing without before the doors: but when we had opened, we found no man within.

Reflections: A new day had just began. The officers sent by the High Priest, marched into the prison yard. They were going to bring the bound and imprisoned Apostles to the Council for further questioning. They walked past the armed guards who had been at post since last night. They noted that the security of the prison yard was intact. Finally they got to the securely locked cells of the Apostles. They called for the keys and had the door unlocked. To their utter shock and surprise, the room was empty. They could not just figure out what might have happened. Unknowing to them, an angel of God had visited and released the Apostles under miraculous circumstances. Like the Apostles, you may have a limiting condition in your life created by your enemies. They may even think it is over with your life but God will shock and surprise them. He will do a new thing to set you free from their evil works. God will make a way for you!

Prayer: Oh God of wonders, do a new thing to shock and surprise my enemies.
Confession: I cannot be kept in the prison yard of my enemies. God will make a way for me!