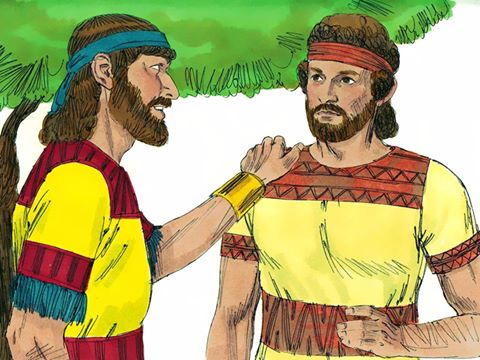 Scripture Reading: 1 Samuel 19:1-2
And Saul spake to Jonathan his son, and to all his servants, that they should kill David. But Jonathan Saul’s son delighted much in David: and Jonathan told David, saying, Saul my father seeketh to kill thee: now therefore, I pray thee, take heed to thyself until the morning, and abide in a secret place, and hide thyself:

Reflections: It was going to be very easy assassinating David through Jonathan, Saul’s son. He was the closest person to David and the two were known to be great friends. King Saul knew he will not fail this time around with his wicked plans as he ordered Jonathan to kill David. David however had no idea that Jonathan had been mandated by his father to kill him. As they stood together chatting, Jonathan had every opportunity to strike and to fulfill the desires of his father but he just could not. He rather helped David to escape! His delight in David was the source of his line of action. To delight in somebody means to have ‘a strong feeling of happiness’ by the person’s presence. This means the sight of David stirred up great happiness in Jonathan. When God causes people to take delight in you, they will be happy to see you and end up doing something good for you! Thank God for his power that makes people take delight in you.

Prayer: Dear Lord, cause people to take delight in me!

Confession: God has made me a delightsome personality. When people see me, they shall take delight in me and do me good!