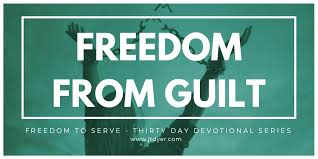 Scripture Reading: Psalm 51:14
Deliver me from blood guiltiness, O God, thou God of my salvation: and my tongue shall sing aloud of thy righteousness.

Reflections: David cried unto God for deliverance from blood guiltiness. Guilt is a feeling of having committed wrong. Blood guiltiness is guilt resulting from murder or bloodshed. Guilt has an important role in convicting you of sin and leading you into God’s presence to confess and repent of your sins. The devil however can use guilt to create such an emotional imbalance in you such that you may end up doing things the wrong way. When this happens, you must go to God for deliverance before it becomes too late. David entered into such a state when his sins of having killed Uriah and going ahead to marry his wife was exposed by Prophet Nathan. He did not only asked God to forgive him for his sins but also asked for deliverance from guilt. This obviously deprived the devil of what he could have further used guilt to do in his life. Don’t allow the devil to use guilt as his weapon to mess you up in life. Get to God in prayer. Like David, ask for forgiveness from sin and deliverance from guilt.

Prayer: Dear Lord, please deliver me from guilt and create a right spirit within me.

Confession: I am delivered from guilt by the power in the blood of Jesus. I will not allow the devil to use guilt to destroy my life.