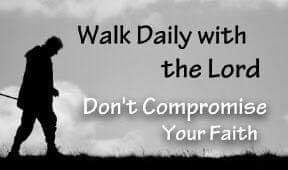 Scripture Reading: Ezra 4:1-2
Now when the adversaries of Judah and Benjamin heard that the children of the captivity builded the temple unto the LORD God of Israel; Then they came to Zerubbabel, and to the chief of the fathers, and said unto them, Let us build with you: for we seek your God, as ye do; and we do sacrifice unto him since the days of Esarhaddon king of Assur, which brought us up hither.

Reflections: God overturned the captivity of the Jews in Babylon and caused them to return to their land through a decree issued by King Cyrus. When they arrived in Jerusalem, they began to build the broken down temple. Their adversaries heard about their sudden breakthrough and devised strategies to stop them. They therefore came to Zerubbabel and asked that they should be given the opportunity to mix up with the Jews and support them in the reconstruction of their temple. They claimed they also sought to worship the God of Israel. But this was a lie. It was a ploy to get them to compromise their relationship with God. Zerubbabel saw through this and rejected their offer. One of the mechanisms the enemy uses to introduce setbacks into our lives is to get us to compromise our relationship with God. You must fight this all the time. Like Zerubbabel, refuse to compromise your faith.

Prayer: Oh Lord, let me see through any strategy of the enemy to get me to compromise my faith in you.

Confession: I live to reject any position to get me to compromise my stand in the Lord.