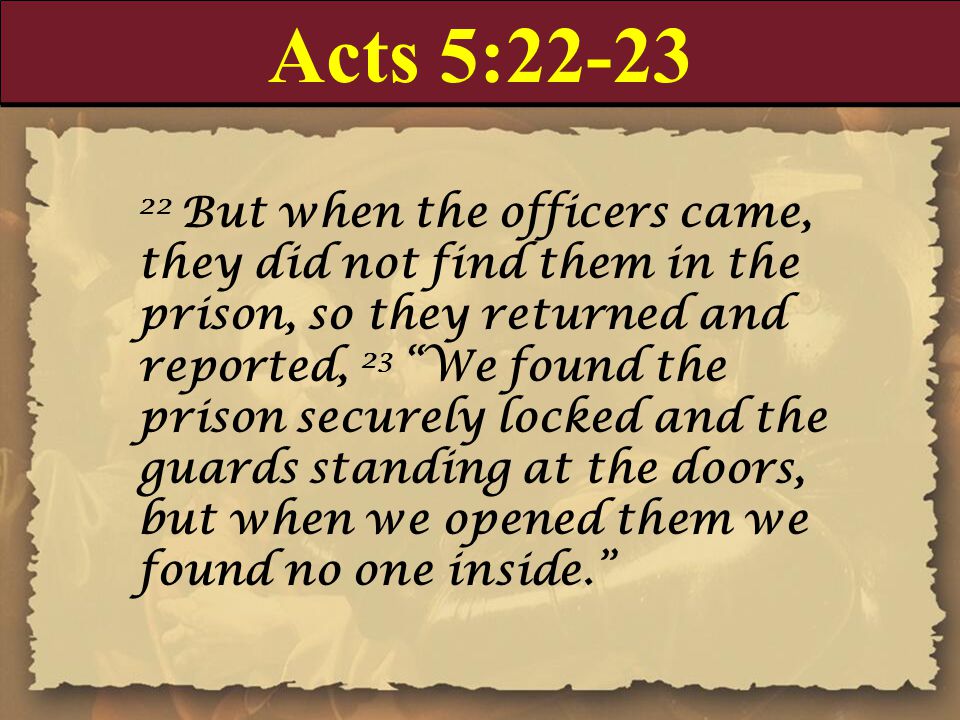 Scripture Reading: Act 5:22-23
But when the officers came, and found them not in the prison, they returned, and told, Saying, The prison truly found we shut with all safety, and the keepers standing without before the doors: but when we had opened, we found no man within.

Reflections: The High Priest and Sadducees could not bear to see the ministry of the Apostles grow and gain such popularity. They therefore had them arrested and jailed. They convened a meeting the following day and requested that the Apostles be hauled from the prison and brought before them. When the men who were sent to undertake this task arrived, they discovered something so strange. Even though the prison doors were securely shut with the prison guards actively on duty, the room was empty when it was opened. The Apostles were mysteriously missing. They actually found them in the temple preaching. It was a real shock. Apparently, the night before, an angel had orchestrated the jail break to prove the limitless power of God and to urge the apostles to continue with their work. Out of envy and hatred, people may create a ‘prison environment’ over you to limit what you can do but God will shock them. He will give you a divine jail break just like the case of the Apostles! You will say with David ‘by thee I have run through a troop; and by my God have I leaped over a wall’ – Psalm 18:29

Prayer: Oh Lord, let your angels deliver me from any prison condition my enemies have created over me. Give me a divine jail break!

Confession: When I am condemned to limiting conditions by my enemies, I shall break out by divine orchestration