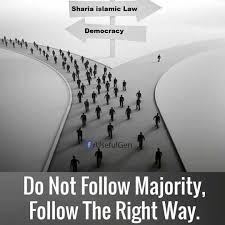 Scripture Reading:Luk 1:59 -60
And it came to pass, that on the eighth day they came to circumcise the child; and they called him Zacharias, after the name of his father. And his mother answered and said, Not so; but he shall be called John

Reflections: It was a joyous moment. Relatives and neighbors had gathered. Spontaneously they all said the baby should be named Zachariah after his father. Their voices sounded as if they were conveying the will of God and that what they had proposed was going to be final. But Elizabeth, the mother of the baby, in her lone voice sharply challenged them. She overruled their decision and maintained that the baby was going to be called John. Interestingly even though she was alone with that directive, she proved to be right on spot with the will of God. Watch out! The voice of the majority may not always be right! Do not follow them. Just follow the right way! Follow the leading of the Holy Spirit!

Prayer: Dear Lord, May I not be swayed by what the majority may say. May I be moved only by what the Spirit says.