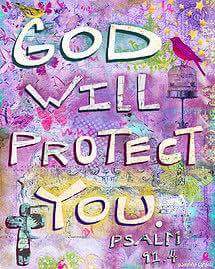 Reflection: David had become a wanted man on the list of King Saul. He therefore took refuge at Ramah, where Prophet Samuel dwelt. King Saul sent soldiers after him. When they got to Ramah, instead of keeping to their assigned task, they found themselves prophesying. Their attention had been completely diverted and taken away from David. Saul heard about it and sent two different contingents at different times to follow up and have David arrested. However at each of the attempts made by the contingents of soldiers, the same unusual thing happened. They found themselves prophesying and completely forgetting about their assigned purpose. Finally, King Saul followed up himself. On arrival at Ramah, he also began to prophesy and like the others totally forgot about his mission. Matters even became worse for him. He stripped himself naked in the process of prophesying. He looked so disgraced and discredited in this posture. It is certain from what happened to these enemies of David that God can divert the attention of your enemies too and even get them disgraced in the process. With such an intervention, you will enjoy your peace of mind and freedom of mobility. Why don’t you ask God to do so for you this Christmas season?

Prayer: Oh Lord, let the attention of my enemies be diverted so I can joy peace this Christmas season.

Confession: The attention of my enemies have been diverted. They no longer pursue my life. I am left alone to enjoy the peace of my life.